Award-winning author Jess Row '93 will return to campus next week as our Peter Baida '68 Writer-in-Residence. Upper School students will have the opportunity to participate in several seminars with Row throughout the day, and have been preparing by reading a short chapter in his new novel, Your Face in Mine, as well as an essay he wrote called “Narrative Sons.” (See below for a link to “Narrative Sons.”)

According to Dwight Garner from The New York Times,

Your Face in Mine more than fulfills the promise of [Jess Row’s] first two books. It puts him on another level as an artist. He doesn’t shy away from the hard intellectual and moral questions his story raises, or from grainy philosophical dialogue, but he submerges these things in a narrative that burns with a steady flame. You turn the pages without being aware you are turning them…There’s some Jonathan Lethem in Mr. Row’s street-level awareness of culture, popular and otherwise. There’s some Saul Bellow in his needling intelligence. Necessity is a mother of invention, this novel declares, but so is uncut human desire. “How far in the future can it be,” Martin asks, “when people say, I don’t want to be me anymore?

Row’s stories have appeared in The Atlantic, Tin House, Conjunctions, Boston Review, Ploughshares, Granta, American Short Fiction, Threepenny Review, Ontario Review, Harvard Review, and elsewhere, have been anthologized three times in The Best American Short Stories (most recently in The Best American Short Stories 2011), and have won two Pushcart Prizes and a PEN/O. Henry Award. He has also received an NEA fellowship in fiction and a Whiting Writers Award. His nonfiction and criticism appear often in The New York Times Book Review, Bookforum, Threepenny Review, and Boston Review, among other publications. 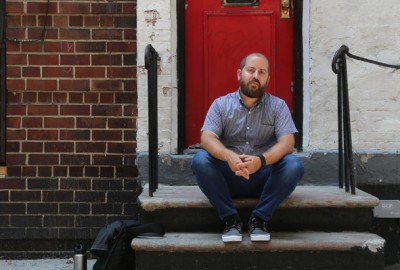