Park welcomed director Jenny Murray to campus to speak with Upper Schoolers about her feature documentary film, ¡Las Sandinistas!. The film, which tells the disappearing story of the women who fought in Nicaragua’s Sandinista Revolution and their continuing struggle for justice, won a SXSW "Special Jury Recognition" Award, and both the top "Jury Prize – Best Film – New Directors Competition" and the "Audience Award for Best Foreign Documentary" at Sao Paulo International Film Festival. It also won the CineLatino Film Festival Audience Award.

¡Las Sandinistas! premiered with theatrical runs in London at Bertha DocHouse and in New York City at the Film Forum, and had its broadcast premiere on PBS DocWorld in March 2019. The film was co-produced by ITVS and was also an IFP 2017 Documentary Lab selection.

Murray spoke with all students in an assembly and held a seminar about the role of women in the Sandinista Revolution. She also held a screening of the full film, followed by a Q&A in the afternoon. 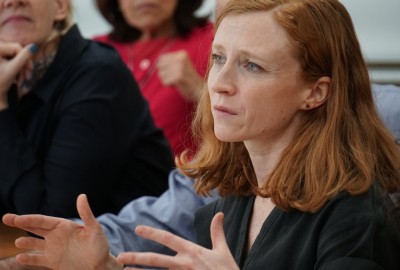