Park welcomed Lia Boyle ’04 and David Peck ’07 to campus this morning as this year’s Millhauser Fellows.

Started by Louise Eiseman Robinson Millhauser ’30 in 1998, and continued by her son, Allen Robinson, The Park School Graduate Student Fellows Program in Science, Mathematics, and Technology celebrates the careers of young alumni currently in graduate school in these fields. Each year, Millhauser Fellows are invited to Park to share their research with Upper School students in an assembly. While here, the fellows visit science and math classes and speak with students who are interested in pursuing careers in these fields.

After completing her junior year at Park, Lia attended St. John’s College in Annapolis. She returned to Baltimore briefly after her freshman year to graduate Park in 2004. Following graduation from St John's, she initially pursued a career in professional theatre, though quickly determined theatre was not a great professional fit. She became interested in medicine while volunteering at the Kennedy Krieger Institute, where she was later hired as the Fragile X Clinic and Research Coordinator. She loved working with families in both a clinical and research setting and this cemented her interest in a career in medicine. She subsequently worked as a research technician at the University of Pennsylvania and then completed the Post Baccalaureate Premedical Program at Bryn Mawr College.

Lia is passionate about teaching and held several volunteer and teaching assistant positions prior to enrolling at Columbia University Vagelos College of Physicians & Surgeons in 2013. The summer after her first year of medical school, Lia was awarded a NIH Summer Research Fellowship to work in the lab of Dr. Wendy Chung, a clinical and molecular geneticist. Lia has continued to work with Dr. Chung, and following the completion of her preclinical medical education and major clinical year, Lia returned to the lab full-time as part of Columbia’s M.D./M.S. program. She recently presented at the inaugural International KIF1A Family Meeting, connecting families and researchers from across the globe who are working on this rare disease, after which she was invited to join the KIF1A Foundation’s scientific advisory board.

Lia recently accepted a predoctoral appointment in Columbia’s Integrated Program in Cellular, Molecular, and Biomedical studies. Starting this summer, she will be putting her medical school studies on hold to complete her Ph.D., with the plan of ultimately graduating with both an M.D. and a Ph.D. Lia is planning a career as a pediatric geneticist who will study and treat rare neurodevelopmental disorders.

David attended Tufts University in Boston, where he studied biology, psychology, and environmental science. In the summers, he studied the nesting behavior of grassland birds (Bobolinks) on their breeding territories in Massachusetts. He also studied blood stress-hormone levels in European Starlings that were exposed to various stressors, like a stuffed and mounted Sharpshinned Hawk.

Upon his graduation from Tufts, David moved to Cornell University in Ithaca, New York, to enter the Ph.D. program in Neurobiology and Behavior. His work at Cornell focuses on the behavioral interactions between parasites and their hosts: What behaviors let hosts fight off parasites? What do parasites do to get themselves from their current host to the next one? How and why have some parasites evolved to be able to manipulate host behavior for their own nefarious purposes? David has studied the behavior of ticks possibly manipulated by the bacterium that causes Lyme disease, the behavioral manipulations of a sterilizing Chlamydia infection in laboratory mice, and most significantly the behavioral interactions between honey bees and the parasitic mite Varroa destructor, which is largely responsible for failing colony health in recent years. In autumn, winter, and spring, David analyzes his data, works on theoretical models of host-parasite evolution, designs further experiments, teaches classes, and writes scientific manuscripts. In the summer, he spends what feels like every waking moment wearing long-sleeved shirts in the hot sun, lifting wooden hive boxes containing as much as 80 pounds of honey and tens of thousands of insects that could each, if so inclined, deliver a decidedly unpleasant sting. For reasons that are still unclear even to him, he enjoys this very much.

We are grateful to Louise Eiseman Robinson Millhauser '30 and to her family for their continued support of the Millhauser Fellowship. Louise's curiosity about the sciences and her appreciation for the value of her own Park education led to her interest in supporting this important initiative. Click HERE to learn more about the program. 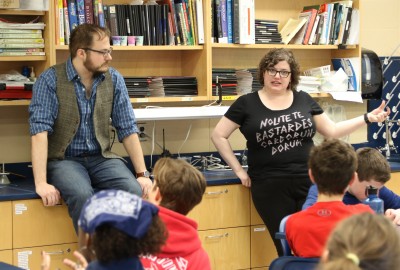