The only student and individual under 25 on the list, Palumbi is recognized for her commitment to encouraging other Baltimore youth to pursue their passion for technology. Palumbi has founded a number of youth hackathons, including “Harbor Hacks” at Digital Harbor Foundation’s tech center last summer and Park’s inaugural Tech Fest last November. Prior to organizing events designed to inspire young coders, the sophomore won prizes for her work in four hackathons.

In September 2017, Palumbi was nominated for Baltimore’s Technologist of the Year — a distinction from Technical.ly Baltimore, which recognizes movers and shakers in the City’s tech sector. The only female nominated in her category, Palumbi was up against individuals twice her age.

Palumbi and the other Visionaries, including Park alumnus and current parent Thibault Manekin '96, will be highlighted in the February issue of Baltimore magazine, on newsstands January 26. The group will also be honored on February 8 with a community celebration at the newly redeveloped landmark, the Stavros Niarchos Foundation Parkway in Station North. 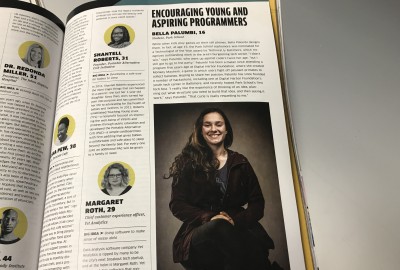