The ISAMR program is a coalition of students, teachers, and professional researchers working on a projected 30-year study of the subarctic climate. The unique extra-curricular program is an opportunity for students to travel twice annually (August and October) to the edge of the Arctic Circle to conduct original scientific research.

Their time in Churchill was spent at a remote research station in Wapusk National Park, living in tents in a fenced-in compound called Nester 1. (The fence is polar bear-proof and Wapusk means polar bear in Cree.) The group spent about 14 hours a day out on the land walking and observing, conducting the planned research, and learning about each other. In the evenings, there were scientific and cultural lectures, family game nights, traditional sewing (using caribou hide, sinew, rabbit fur, and sheep lining), great desserts (homemade), and Northern Lights.

During this trip the group measured the active layer thickness (the part of the soil that freezes and thaws each year) and monitored the vegetation that grows on top of the soil to the species level in the eight different habitats they've been studying for the past 10 years. In addition, the group took soil samples, brought them back to Park, and will use the school laboratory to identify the bacterial communities (through DNA analysis) in four of the eight habitats. "Of all the genetic information known about bacteria, about 0.2% comes from Arctic communities," Julie reports. The students are hoping to contribute to the greater climate-change knowledge base by presenting at this year's International Arctic Net Scientific Conference in Ottawa. 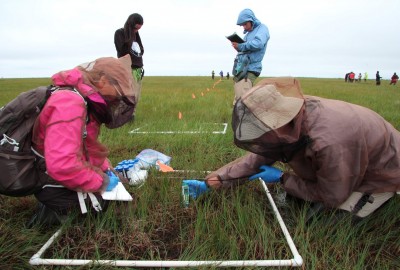