Yesterday, members of the International Student-led Arctic Monitoring and Research (ISAMR) program left for their annual summer trip to Northern Canada to conduct permafrost research and its relationship to climate change in Manitoba’s Wapusk National Park. This year, nine Park students, Upper School science teacher and program co-founder Julie Rogers, and Park parent Mark Dhruv, are meeting up with 13 other students, teachers, and professors from Baltimore, Winnipeg, and Churchill.

The ISAMR program is a coalition of students, teachers, and professional researchers working on a projected 30-year study of the subarctic climate. The unique extra-curricular program is an opportunity for students to travel twice annually (August and October) to the edge of the Arctic Circle to conduct original scientific research.

This trip, the group will measure the active layer thickness (the part of the soil that freezes and thaws each year) and monitor the vegetation that grows on top of the soil to the species level in the eight different habitats they’ve been studying for the past 10 years. In addition, the group will take soil samples, bring them back to Park, and identify the bacterial communities (through DNA analysis) in four of the eight habitats back at school in the lab. “Of all the genetic information known about bacteria, about 0.2% comes from Arctic communities,” says Julie. “We are hoping to contribute to the knowledge base by presenting at this year's International Arctic Net Scientific Conference in Ottawa.”

New this year, the group will study the caribou migration with Dr. Brook, the co-founder of ISAMR and professor at the University of Saskatchewan. Julie explains: “The question we are asking in this study is, ‘Is the caribou migration changing course (moving north) due to climate change?’ We will also be working with Dr. Roth, a professor at the University of Manitoba, on a study of fox dens. The question of this study is, ‘Are arctic foxes acting as ecosystem engineers on the beach ridges of tundra through nutrient deposition?’” 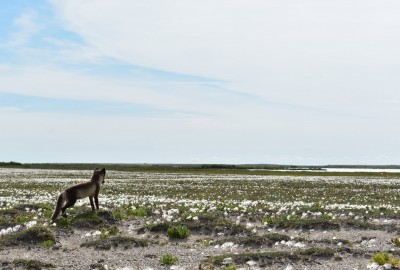