Dr. Chris Lebron, Associate Professor of Philosophy at Johns Hopkins University and Park School parent, published an Op-Ed in the New York Times this week entitled White America Wants me to Conform. I Won't Do It. In his piece, Dr. Lebron says:

“Three major medical associations recently declared racism and police brutality public health crises. But I had long ago begun thinking of racism as a kind of social disease. I even gave it a name — Racial Diminishment Syndrome.”

Dr. Lebron specializes in political philosophy, social theory, the philosophy of race, and democratic ethics. His first book, The Color of Our Shame: Race and Justice In Our Time (OUP 2013) won the American Political Science Association Foundations of Political Theory First Book Prize. His second book The Making of Black Lives Matter: A Brief History of An Idea (OUP 2017) offers a brief intellectual history of the black lives matter social movement. Dr. Lebron is the winner of the 2018 Hiett Prize In The Humanities, which recognizes a “career devoted to the humanities and whose work shows extraordinary promise to have a significant impact on contemporary culture.” 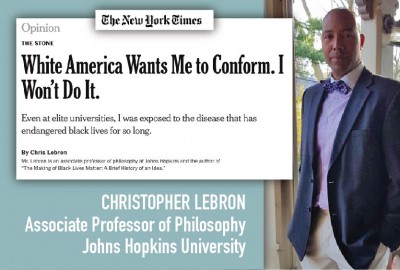