The Resident Journalist program is sponsored by the family of Robert L. Weinberg, a member of the Class of 1940 and devotee of Baltimore journalist H.L. Mencken. Resident journalists give a presentation to Upper School students and meet with classes throughout the day. 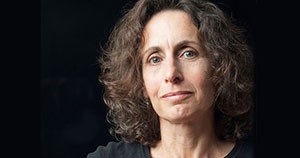 Elizabeth Kolbert is an award-winning journalist and author. She has been a staff writer at The New Yorker since 1999. Previously, Elizabeth worked at the New York Times, where she wrote the Metro Matters column and served as the paper’s Albany bureau chief. Her three-part series on global warming, “The Climate of Man,” won the 2006 National Magazine Award for Public Interest and the 2006 National Academies Communication Award. She received a Heinz Award in 2010, and won the 2010 National Magazine Award for Reviews and Criticism.

She is the editor of The Best American Science and Nature Writing 2009 and the author of The Prophet of Love: And Other Tales of Power and Deceit; Field Notes from a Catastrophe; and The Sixth Extinction, for which she won the Pulitzer Prize for general nonfiction in 2015. She received the Blake-Dodd Prize from the American Academy of Arts and Letters in 2017. 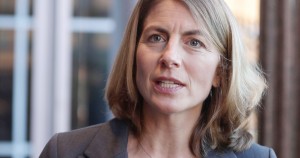 A print and broadcast journalist, Sacha Pfeiffer is a member of the Boston Globe Spotlight Team, which won the 2003 Pulitzer Prize for Public Service for its stories on the Catholic Church’s cover-up of clergy sex abuse. That reporting is the subject of the Oscar-winning movie “Spotlight.” In more than a decade at the Globe, Pfeiffer has produced numerous investigative series and covered legal affairs, the courts, nonprofits, philanthropy, and wealth, among other topics.

Pfeiffer has also been the host of “All Things Considered” and “Radio Boston” at WBUR, Boston’s NPR station, where she won a national 2012 Edward R. Murrow Award for broadcast reporting, and a guest host of NPR’s nationally syndicated “On Point” and “Here & Now.” Pfeiffer was a 2004–5 John S. Knight journalism fellow at Stanford University and is a co-author of the book Betrayal: The Crisis in the Catholic Church. (www.bostonglobe.com) 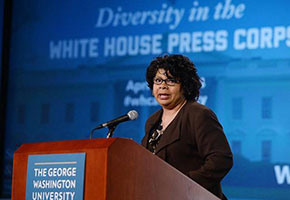 White House Correspondent April Ryan has a unique vantage point as the only Black female reporter covering urban issues from the White House — a position she has held since the Clinton era. On behalf of the American Urban Radio Networks, and through her "Fabric of America" news blog, she delivers her readership and listeners a “unique urban and minority perspective in news.” April is one of only three African Americans to serve on the board of the prestigious White House Correspondents Association, and was recently named the 2017 Journalist of the Year by the National Association of Black Journalists. She is the author of the award-winning book, The Presidency in Black and White, and At Mama's Knee: Mothers and Race in Black and White.

Katherine Boo is a Pulitzer Prize-winning investigative journalist who has documented the lives of people in poverty. A former reporter and editor for The Washington Post, she has been a staff writer for The New Yorker magazine since 2003. Her book Behind the Beautiful Forevers: Life, Death and Hope in a Mumbai Undercity won the National Book Award for Nonfiction in 2012, among others. Boo was named a MacArthur "Genius Grant" fellow in 2002. A series she wrote for the Washington Post on the treatment of the mentally disabled in D.C. earned a Pulitzer Prize for Public Service in 2000.

Ta-Nehisi Coates is a national correspondent for The Atlantic, where he writes about culture, politics, and social issues. He is the author of The Beautiful Struggle and the New York Times bestseller Between the World and Me, for which he won the 2015 National Book Award for nonfiction. A MacArthur “Genius Grant” fellow, Coates has received the National Magazine Award, the Hillman Prize for Opinion and Analysis Journalism, and the George Polk Award for his Atlantic cover story “The Case for Reparations.”

Aaron Henkin is co-creator and producer of The Signal on WYPR. His work has aired nationally on NPR's Morning Edition and All Things Considered, PRI's Studio 360 and The World, and APM's The Story. Aaron is also creator, producer, and host of the Smithsonian Folkways Recordings radio series, Tapestry of the Times.

David is an American journalist and author, currently serving as an associate-editor for The Washington Post. He received a Pulitzer Prize for National Reporting in 1993 for his coverage of then-candidate Bill Clinton during the 1992 United States presidential election.

Frank is a 23-year veteran of television news. He's producer for the Newseum and The Freedom Forum, a nonpartisan foundation that champions the First Amendment.

With a special focus on Baltimore news, Susan Weintraub and Peter Warren moderated a panel discussion with three local journalists. Panelists include:

Editor of Bloomberg BusinessWeek and former deputy managing editor of Time magazine, where he oversaw Time.com.

A graduate of Park School and a reporter with NPR's National Desk, covering social policy.

Environmentalist, educator and author of The End of Nature and Enough.

Emmy Award-winning television writer. Creator of The Wire and The Corner. Burns is a former Baltimore detective and public school teacher and often draws upon these experiences for his writing.

Contributor to The New Yorker and author of Chain of Command: The Road from 9/11 to Abu Ghraib.

Director of the Project on Media Ownership at New York University and author of Boxed In: The Culture of TV.

Member of the Editorial Board, The New York Times