In a program that spans more than 30 years, the Parents' Association sponsors Resident Scholars to give a presentation to the Upper School student body and meet with classes throughout the day. 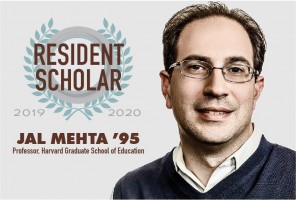 Jal Mehta ’95 is a professor at the Harvard Graduate School of Education (HGSE). His research explores the role of different forms of knowledge in tackling major social and political problems, particularly problems of human improvement. Mehta has also written extensively on what it would take to improve American education, with a particular focus on the professionalization of teaching. Mehta joined the HGSE faculty in 2008, and was named an emerging scholar by the American Educational Research Association in 2014. He was co-editor of the Learning Deeply blog at Education Week, and was the top-ranked junior faculty scholar in the Rick Hess Education Week rankings, also in 2014. Mehta won the Morningstar Teaching Award at HGSE, and was awarded a Radcliffe Fellowship for the 2016-17 academic year. The author, co-author, or co-editor of four books, Mehta's most recent, In Search of Deeper Learning: The Quest to Remake the American High School (Cambridge: Harvard University Press, 2019), seeks to identify where and how powerful learning is happening in schools today.

Dr. Leana Wen is the Commissioner of Health for the City of Baltimore. An emergency physician and patient and community advocate, she leads the Baltimore City Health Department (BCHD). BCHD’s responsibilities include maternal and child health, youth wellness, school health, senior services, animal control, restaurant inspections, emergency preparedness, STI/HIV treatment, and acute and chronic disease prevention. Two weeks prior to her assembly at Park, Dr. Wen was named the next president of Planned Parenthood.

Video excerpts from Dr. Wen's assembly with the Upper School:

Dr. O’Neil is the author of the New York Times bestselling Weapons of Math Destruction: How Big Data Increases Inequality and Threatens Democracy. She made the switch from academia (professor at Barnard College) to the private sector, working as a quantitative analyst for the hedge fund D.E. Shaw, and then for RiskMetrics. She left finance in 2011 and started working as a data scientist in the New York start-up scene, building models that predicted people’s purchases and clicks. Dr. O’Neil wrote Doing Data Science in 2013, and launched the Lede Program in Data Journalism at Columbia University in 2014.

Dr. Carl Hart is a neuropsychopharmacologist at Columbia University, where he conducts research and teaches undergraduate and graduate courses in neuroscience, psychology, and pharmacology. A key focus of his research is to study the complex interactions between recreational drugs and the neurobiological and environmental factors that mediate human behavior and physiology. As a scientist, activist, and educator, Dr. Hart works with community groups and government officials to bring about more effective drug policies and treatments.

Matthew B. Crawford is an American writer and research fellow at the Institute for Advanced Studies in Culture at the University of Virginia. The author of Shop Class as Soulcraft, the New York Times Bestseller, Matthew is now a contributing editor at The New Atlantis - A Journal of Science and Technology. He is also a motorcycle mechanic.

Cathy A. Small, Ph.D., Professor in the Department of Anthropology at Northern Arizona University, spoke about the often unconscious ways that culture shapes us and the breakthroughs in insight and perception that can happen in recognizing cultural assumptions.

Dr. Perkins, Senior Professor of Education at the Harvard Graduate School of Education, is a "teacher of teachers" and is widely known for his work as co-founder of Project Zero. Perkins devoted one day of his three-day residency to each of the divisions — Lower, Middle, and Upper School.

Professor of mathematics at UMBC and author (The Death of Vishnu — a novel long-listed for the 2001 Booker Prize and short-listed for the 2002 PEN/Faulkner Award — about social and religious tensions in India, The Age of Shiva, and "The Seven Circles."

Curator in Charge, Department of Photographs at the Metropolitan Museum of Art.

Award-winning novelist, biographer, essayist, songwriter, and professor of English at Goucher College. He has written extensively, both fact and fiction, about the history of Haiti.

Adjunct professor in the Department of Physics and Astronomy of the Johns Hopkins University and an astronomer at the Hubble Space Telescope Science Institute. His research interests include theoretical astrophysics, accretion into black holes, neutron stars and white dwarfs, supernova explosions, binary star evolution, and planetary nebula.

Author of The Lionheads, Ulysses S. Grant, an Education for Our Time, and All Loves Excelling, Vietnam veteran, scholar and Oxford graduate, who was president of Briarcliff and Hampden-Sydney colleges, superintendent of the Virginia Military Institute, and is now president of the Harry Frank Guggenheim Foundation.

Pianist, conductor, and Andrew W. Mellon Chair in Piano at the Peabody Institute.

Former Poet Laureate of Maryland, Chancellor of the Academy of American Poets, Distinguished Professor at St. Mary's College of Maryland.

Associate Justice, Supreme Court of the United States. Presentation: "On Interpreting the Constitution."

Professor and Director, Institute of Human Virology, University of Maryland.

President of Bard College. Presentation: "The Future of the American High School."

Physician, educator, and editor of the New England Journal of Medicine. Presentation: "Medical Professional Ethics in a Commercialized Society."

Professor of Philosophy, Union of Experimenting Colleges and Universities. Presentation: "Being Good and Acting Well: A Philosopher Looks at the Conflicts Between Private Morality and Public Effectiveness."

Professor of History, Princeton University Presentation: "Turning Lincoln's Picture to the Wall: The Shift of Blacks to the Democratic Party 1928-1940."

Consultant dedicated to causes of environmental matters, civil liberties, and consumer protection. Presentation: "Do You Count?: The Effect of Grassroots Participation on the Socio-Political Outcome."

Assistant Professor, Department of Anthropology, University of Michigan. Presentation: "Adolescent Social Categories: The Development of Workers and Managers in a Suburban High School."

C. Douglas Dillon Professor of the Civilization of France, Harvard University. Presentation: "What is Body Language? A Discussion of Cultural Problems in Non-Verbal Communication."