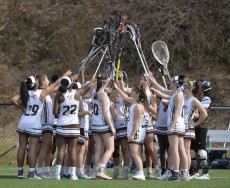 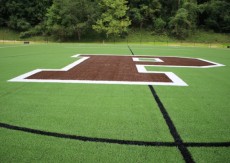 Park’s Kelly Field AstroTurf opened in the fall of 2014. Lined for field hockey, lacrosse, and soccer competition — with the soccer field scaled at collegiate dimensions — the expansive surface also includes a conditioning track, highlighting the optimal cushioning characteristics, along with the traction and torque release properties of this latest generation in field technologies.

“Playing lacrosse in college was not something I seriously considered until my junior year at Park. My high school coaches, who were collegiate athletes themselves, nurtured my passion for the sport and were instrumental in connecting me with club teams and college coaches as I began my college search in earnest. I am currently in my senior year at Oberlin College, a DIII school, playing as a Yeoman defender. I was named to Second Team All NCAC my freshman year, and First Team All NCAC my sophomore year. The dedication, talent, and lacrosse IQ I needed in college were all developed during my time at Park.”

From Grade 4 in Lower School, through Middle School, and competitive varsity level teams in the Upper School, Park emphasizes a balanced approach. We teach fundamental athletic skills, conditioning and fitness, game strategy, and the lifelong skills of perseverance, commitment to a common goal, overcoming adversity, and winning with humility and integrity. Led by two full-time athletic directors, our teacher-coaches build personal relationships with their student athletes that mirror the values, habits of mind, and character nurtured in the classroom.

We value both participation and a competitive spirit. In the Lower School and Middle School, all students who wish to try out for a team are included and receive playing time. Beginning in the eighth grade, and increasing each year through junior varsity and varsity levels, skilled and dedicated athletes receive the majority of the playing time; it is our goal to field competitive teams and win games, playoff victories, and championships. Both boys and girls play in highly competitive leagues, the MIAA and IAAM respectively.

The mission of the physical education program is to provide students with the basic foundation of motor and manipulative skills, an understanding of the importance of physical fitness and sport, and the opportunity to develop effective personal and social skills. Students will be provided the opportunity and information necessary to make decisions about physical activity for their personal challenge, enjoyment, health, self-expression, and social interaction. Our goal is to promote a positive learning environment that meets the needs and abilities of all students and encourages them to maintain a physically active lifestyle.

(1-3 teams per sport, depending on participation)

“Being in a leadership role on sports teams and in the Bruin Athletic Council at Park gave me a wider perspective beyond just the wins and losses. This deeper understanding led to my desire to be a part of a team in search of a common goal, which helped tremendously in the college recruiting process. I realized that playing sports in college would give me stronger relationships and more lasting bonds that wouldn’t be possible if I wasn’t involved in athletics on campus. I truly think this is because at Park, I was encouraged to not only commit 100% to the teams that I was a a part of, but I also learned the value of diversifying my experience.”

5 fields on campus for field hockey, soccer, and lacrosse, including the new, state-of-the-art AstroTurf field